The Cluetrain Manifesto asserts that “Markets are Conversations.” The Manifesto is a document published in 1999 and 10 years later is still considered to be an outstanding treatise on the Internet phenomenon – in regards to the impact and opportunities of Internet and web technology on the modern businessman. Nowhere has this assertion been borne out more than in the complex, fascinating world of Social Media Marketing (SMM).

What is Social Media Marketing?

SMM therefore is the use of these networks to promote and market products, services, or information to the promoter’s intended audience. This could be a traditional product seeking a market, such as an author promoting a new novel. Or it could be something much bigger; the US Presidential campaign of 2008 brought Twitter into the spotlight as a way for the candidates to quickly transmit a message to their audience, keeping them updated on happenings on the trail. In the latter case, no tangible product was being promoted per se, but it was a means of marketing the candidates and their messages. Twitter exploded in popularity following the election, and remains a current topic of discussion.

The intelligent business strategy will seek to understand these opportunities, and reach out to the social media markets available, in order to directly reach their customers. SMM has as many pitfalls as opportunities, however. Several politicians have had their tweets made public, and have regretted it. Here are some easy mistakes to make and how to avoid them.

Mistake #1 – Not Having A Blog

Everyone has a blog. While this may not be true in fact, it certainly is true in perception. Free services such as WordPress and Blogspot allow anyone with a connection to have a voice in an organized and attractive form. Twitter, Facebook, and other networks are useful, but they aren’t directly under a user’s control. A blog, however, is, and the savvy marketer will take advantage of that. In a blog, a user can post their thoughts, analysis, and arguments with very little restraint and go into greater detail than most social networks permit. For example, Twitter only allows posts of 140 characters, which is certainly too small for a product description or a dissection of a major political speech. However a short ‘tweet’ telling book fans that their favorite author has been interviewed by a blog will bring people flocking to the site where they will not only read the interview, but probably the many other articles on the site as well.

This of course means that good blogging is consistent blogging. A blog can’t be neglected and only updated when big things happen – the modern attention span of Internet users is fairly short. Bloggers need to consistently post good content in order to keep drawing in their intended audience; not month by month but sometimes even day by day.

Mistake #2 – Not Branding Yourself

The web is an information explosion and getting anyone to notice a product or a company consistently is a challenge. The savvy web marketer must take advantage of the chance to brand their name with every networking opportunity. If a company has a blog and a product website, they must be connected. The blog must promote the site’s main goal, and the site must refer visitors to their excellent blog content. Posts to social networking sites should refer to this ‘brand’ image, and keep the message consistent across them all. The successful SMM campaign will treat each element as a unified whole, and approach them systematically. Every Twitter message, every Facebook post should remind users who is posting the content, and where they can find more.

Mistake #3 – Not Being Nice

As mentioned above, “Markets are Conversations.” The users on the Internet are not robots. They will respond with a pre-programmed action when a certain combination of criteria is applied. They are people with ideas who think critically, and who have become accustomed to having their say. While a marketer must take every opportunity to promote their message, this does not mean forcing it into every single conversation. Participants on social networking sites will quickly identify the more ham-fisted efforts of some marketers, and let their acquaintances know of their displeasure. A bad reputation can spread quickly on the Internet – a certain St. Louis police officer lost his job when a video of the officer abusing his authority was posted to Google.

So the proper tactic is not to view these markets as simple places to advertise, but places to converse. Simply popping onto Facebook and posting a new product to every available group is a quick way to get noticed, and disregarded as incompetent. On the other hand, a user could join several groups with discussions pertaining to the subject of their personal passions, and cultivate friendships and a reputation as a quality commentator. Then, when they refer folks to their blog, they are more likely to be taken seriously. Simple courtesy and respect for the groups can go a long way to securing a few more hits per post.

In essence, SMM requires thought, persistence, and critical thinking just as any other marketing campaign. It is not a short series of clever commercials that can be aired for several months at a time, but a means of consistently communicating, day in and day out, with a target audience. Good SMM must provide constant, consistent content for its target markets and be prepared to participate in a lot of give-and-take with an audience uniquely suited to making their voices heard.

Enzo F. Cesario is a Copywriter and co-founder of Brandsplat. Brandcasting uses informative content and state-of-the-art internet distribution and optimization to build links and drive the right kind of traffic to your website. Go to http://www.Brandsplat.com/ or visit our blog at: http://www.brandsplatblog.com/
This article courtesy of SiteProNews.com 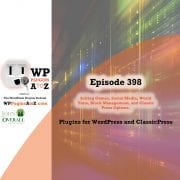 Double Your Income With Blogging